One more weekend until school starts. I’ve had a long four month summer break and after this weekend, I’ll be back into school mode. As the first day of school grows closer, I’m overcome with this anxiety that I’m not up to par academically with the others. I’ve never been the smart type, I’ve always been an average student and it’s still a miracle to me that I got accepted into UBC. I voiced my concerns to a friend, and she told me to “prove them wrong”. That’s probably one of the most encouraging words I’ve been told.

For this labour day long weekend, I share with you 9 things from my summer, taken from my phone:

That concludes this post. I hope you enjoy the long weekend and what is left of summer! It already feels like Fall here in Vancouver, or should I say Raincouver. Thanks for reading!

This past Friday I celebrate my 20th birthday. It’s hard to fathom the fact that I am no longer a teenager, but as I grow into a young adult, I’ve experienced some of the hardships that come with it. I usually like to celebrate my birthday with family and close friends because I’ve never been into big parties. After a miserable birthday last year, I was happy that I was able to have family over to celebrate my birthday. I share the same birthday as my dad, so it was a celebration for both our birthdays!

Pictured above is the two cakes I got for my dad and I’s birthday. The one left is a earl grey cake from Trafiq bakery and the one on the right is a green tea chiffon cake from H-Mart. I love anything earl grey and green tea, so naturally I would be drawn to these cakes.

The earl grey cake was beautifully decorated with edible gold glitter and crunchy pearl balls (which were really good). The cake itself was also delicious with a nice earl grey flavour that paired nicely with the chocolate ganache.

The green tea chiffon cake was a bit of a disappointment because it lacked green tea taste. It still tasted good though, as it was light and creamy, but it just tasted like a regular cake. The only element of the cake that exhibited green tea flavour was the glaze on top, but it was barely enough to flavour the whole piece.

I got a ‘happy birthday’ text from a number from Chicago, which at first I thought it was from my friend who is currently in Europe, but after Googling the area code, I discovered it is a Chicago number. The thing is, I don’t know anyone who lives in Chicago or is in Chicago at the moment, so I’m kind of creeped out and curious to know who it is.

So that’s it for this post. Thanks for reading!

Hey everyone! I’m back from Oregon but since I only went for a few days, there’s nothing exciting to blog about. On Tuesday, M, Es S and I went to PNE because free admission was offered from a certain time. PNE is a yearly tradition for me even though it’s similar every year, but it just gives me a sense of nostalgia. Plus, PNE is the only time where I can eat some greasy fair food! We didn’t stay very long but here’s what we ate:

From Prairie BBQ we got the ribs, brisket and pulled pork combo. Even though they won consumers choice last year, the brisket was overly salty and a dry, and the ribs were also dry. The pulled pork wasn’t bad, but it needed BBQ sauce for added flavour. Overall, we were disappointed.

I tried the ribs from Gator BBQ later that evening but forgot to take a picture of it, but their ribs were much better. They were fall off the bone tender and didn’t need any extra BBQ sauce.

From Pickle Pete’s we got an order of deep fried pickles. These weren’t really what we expected. Although the fried pickles were clumpy and not very crispy, they didn’t taste too bad. The accompanying chipotle mayo also went well with the pickles.

I will definitely be back. I usually go after 9pm because it only cost $5 to get in, although many of the BBQ is sold out by then.  This time around I didn’t get any wiggle chips, which I get every year, so I will be back to get some of those and to try some other fair food!

I can’t believe that my summer is almost over. In a few weeks I’ll be attending a new school and I am actually very nervous. After a long summer break, it’s going to be difficult for me to get back into my school routine. I’m going to Portland tomorrow for a few days to do some tax free shopping and some eating of course. I have so many things I want to buy, I hope my wallet doesn’t cry by the end of the trip.

Here are some phone pictures of my month so far: 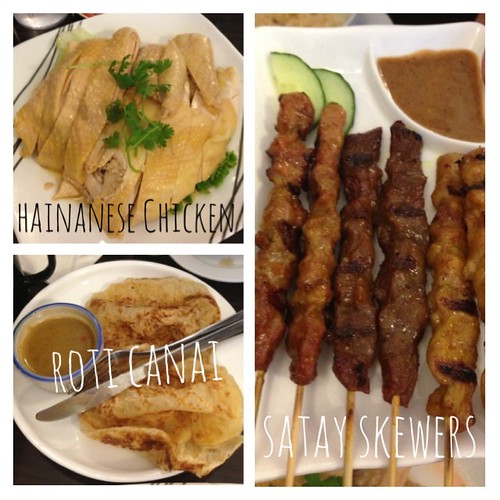 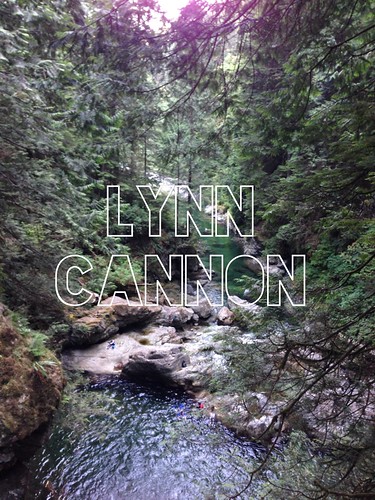 {Went hiking at Lynn Cannon in North Vancouver, it was so nice!} 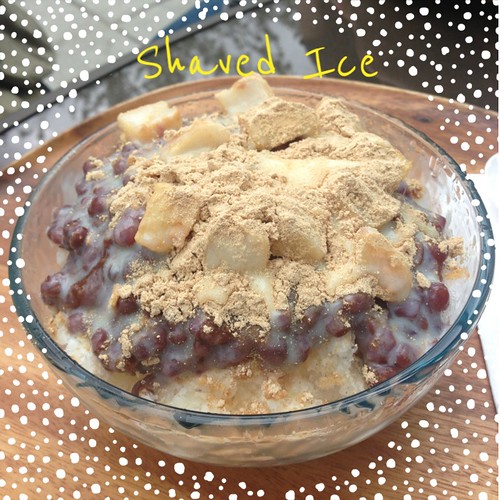 {Shaved Ice from The Coffee Bun} 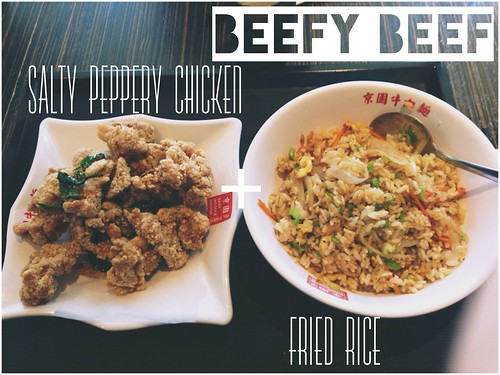 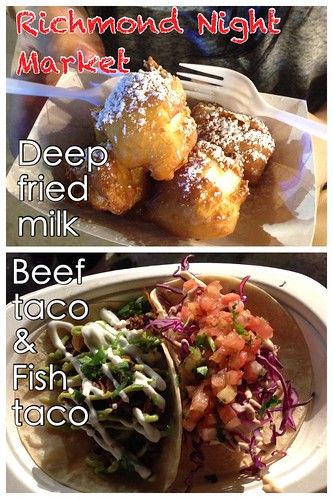 {2 dishes I ate at the Richmond Night Market}

I’ll try to update when I come back from Portland, but as you can tell I haven’t been very consistent with blogging lately. Thanks for reading! 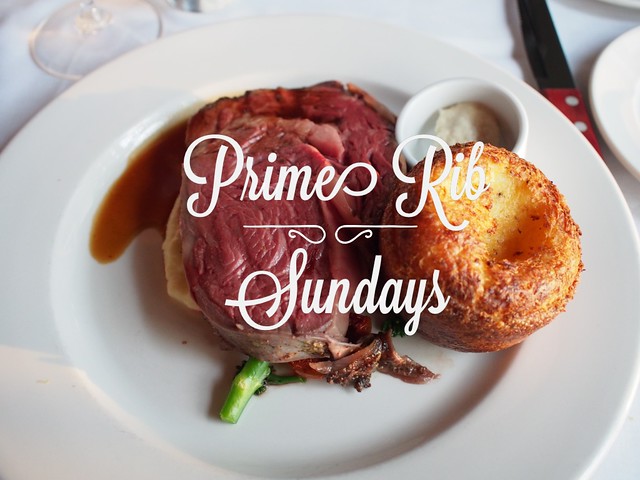 Back on Father’s day, my family celebrated the occasion at Seasons In The Park, located at Queen Elizabeth Park. Luckily for us, Father’s day was on Sunday so we were able to try their prime rib Sunday menu, a 3 course dinner for $35. Pretty good deal, considering the prime rib alone cost $27.50. 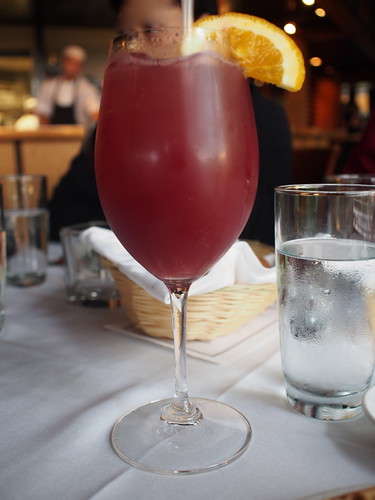 Sundays are also sangria sunday’s, so I got a cup of sangria to go with my meal. 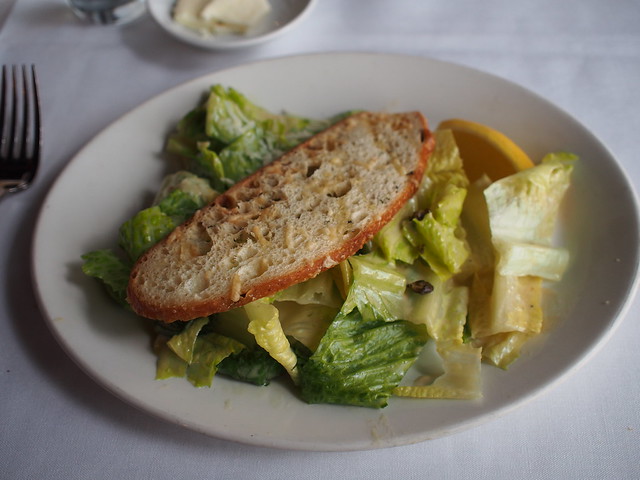 Both my dad and I ordered the 3 course prime rib dinner and the first course to arrive was the caesar salad. The salad was accompanied by a big piece of crispy crouton. The salad was okay in my opinion, it wasn’t mind blowing nor was it bad. It was nicely dressed though, with the perfect amount of dressing. 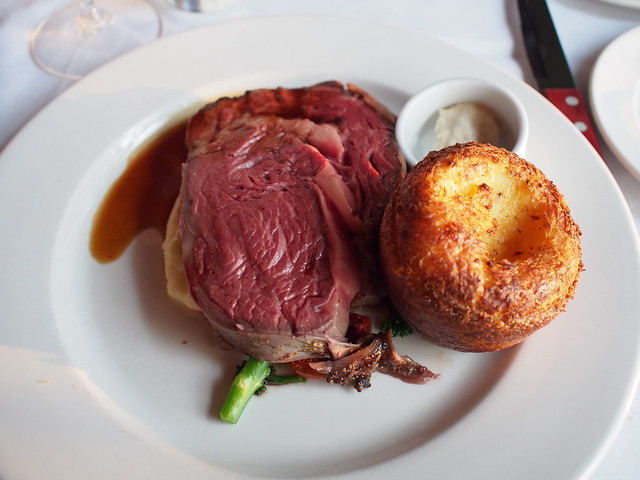 Next to arrive was the prime rib served with yorkshire pudding, broccoli rabe, mash potato and squash. The prime rib was cooked perfectly medium rare and so tender. This was my first time trying yorkshire pudding and it reminded me of choux pastry; light and airy on the inside with a crispy exterior. Overall, well executed and delicious tasting dish.

END_OF_DOCUMENT_TOKEN_TO_BE_REPLACED